For decades, India has been a source of inspiration for artists in the West. As the recent Guggenehim Exhibition The Third Mind revealed, artists in the United States were looking to India as early as the 1840s. Italian artist Vittorio Matino follows a similar passage to India. His newest series of paintings is the culmination of his ongoing fascination with the color traditions of the Subcontinent. The Milan-based artist has produced vibrantly colored abstract paintings for the past 40 years. He is best known for his plunging vertical compositions, which he creates by layering paint onto large canvases with a palette knife, then scraping down the center with a brush to expose the brightly stained surface underneath. With this technique, he reveals luminous bands of contrasting colors that overlap against a flat single-colored background.

Matino's recent trip to the India inspired a shift toward more exuberant colors and expressive gestures. "I had the impression visiting India that color is victory against dark, against negative forces and against poverty," said Matino. In these latest works, colors are no longer confined to the center of his narrow canvases. Matino now uses slightly arched strokes to expose a continuum of colors that moves freely toward the edges of the canvas. Playing with the translucency of paint, he makes the bands of color swell and contract, giving the illusion of expanding and receding space. This motion imbues the work with a spiritual quality—the vibrations of color suggest the reverberation known as prana or life force in India. 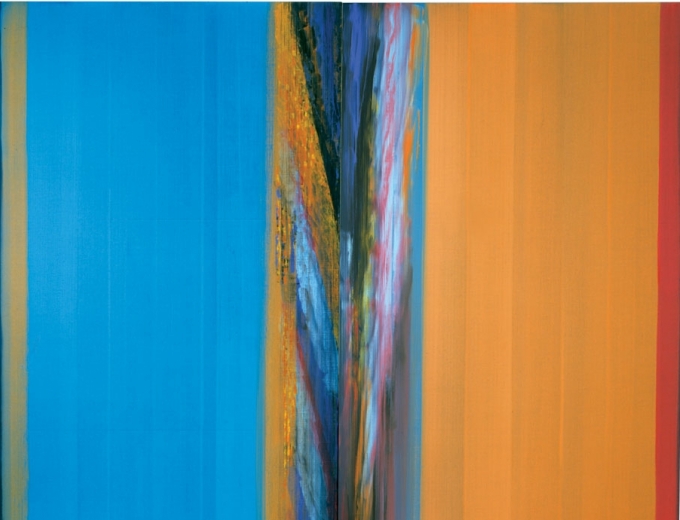 Artist
Vittorio Matino
Back To Top