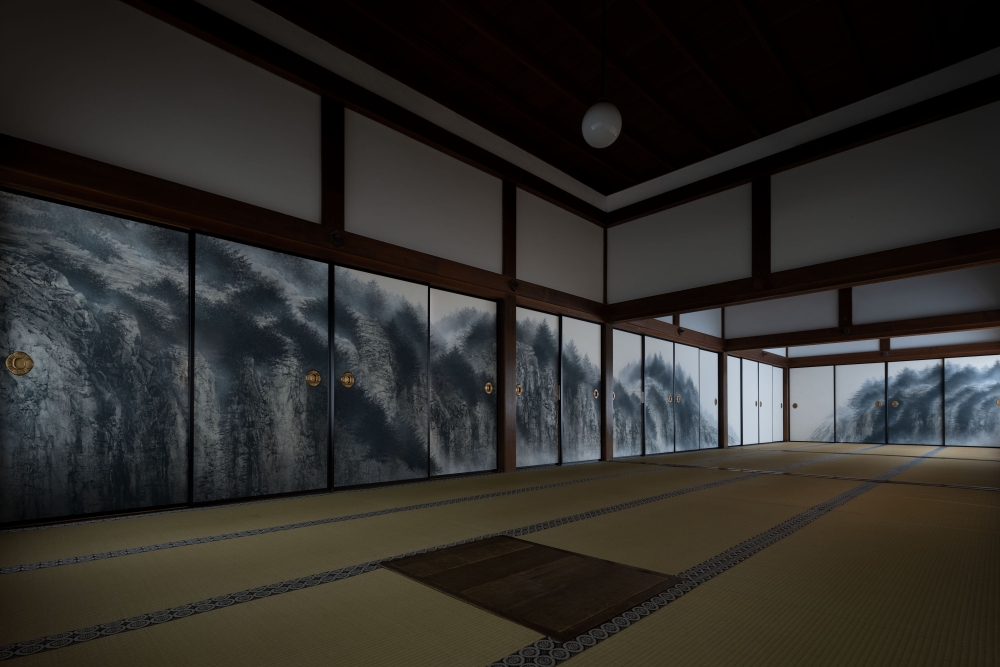 We congratulate Hiroshi Senju on the installation of two monumental paintings at Kongobuji Temple at Mount Koya in Japan, the center of Shingon Buddhism. The venerated temple was founded by Kobo Daishi, also known as Kukai, one of Japan’s most important religious figures, in the Heian period. It is now a UNESCO World Heritage site.  The temple commissioned Hiroshi Senju to create a waterfall and a cliff to celebrate Mount Koya’s 1,200th anniversary. The two paintings were installed as fusuma (sliding doors) during a special dedication ceremony in early November.

“There are more than 20,000 works of art that are considered national treasures and important cultural artifacts at Koyasan Kongobuji Temple alone,” says Senju. “That is why it is called Shosoin [treasure house] of the mountain.  I am honored to be included in the collection.”

Senju created these epic paintings over the last three years, a massive undertaking he considers the culmination of his career to date. Ahead of the installation and dedication, the paintings were exhibited in major museums throughout Japan.

The waterfall works are mounted on the reverse of Kano school fusuma, in a room where the anniversary of Kobo Daishi's passing is commemorated annually. The cliff works are mounted in the ritual room, where the ceremony for boys and girls entering the priesthood is held. Senju found inspiration for these works in the rugged cliffs and landscape overlooking the Pacific Ocean where Kobo Daishi spent his youth training for the priesthood.

This installation and dedication ceremony at Mount Koya caps an eventful period in the artist’s career, with recent acquisitions by the Metropolitan Museum of Art, Brooklyn Museum, Royal Ontario Museum and Los Angeles Country Museum of Art.

Beginnings, his most recent solo exhibition in the New York galleries featured a powerful new series of waterfall paintings created during the lockdown. The exhibition will travel to the Singapore gallery in January of 2021 with additional new works.