Sundaram Tagore Gallery is proud to present Joan Vennum's one-woman exhibition. A native of New York, Vennum studied art at the University of Illinois, Champagne, and at Washington University in St Louis. Her main inspirations have been the works of Mondrian, de Kooning and particularly the Dutch Old Masters and their use of both space and minute detail. Later, Vennum became part of painter Paul Burlin's artistic circuit and that too played a role in her work.

In her early development, two important events affected her artistic point of view: As a child, Vennum visited the New York planetarium, and was mesmerized by the simulation of the universe and the vastness and mystery of space, the images of which were seared into her aesthetic consciousness. Then, as an adult, she traveled to Sicily where she saw the impact of weather on the landscape, the coming together of the elements on the horizon in front of her. She was entranced by the spectacle of the sea, mist, and cloud formations interacting and reacting to one another.

Vennum says, "My goal is to express a large concept visually using what appear to be the simplest forms." Though she is an Abstract artist, with roots in the post-Abstract Expressionism of women painters like Lee Krasner and Joan Mitchell, her painstaking interest in surface detail lends her work a unique aspect. Vennum's demand for pictorial dynamism—evidenced in the way she creates three-dimensional space only to destroy it—has produced a rich, virile body of work containing ambiguous space filled with light, grace and beauty.

Vennum achieves this intense surface detail and structure through dense stippling: scratches and marks in vermilion, blue or milky white rise and recede in a vibrational mode that seems to pulsate with life force. She has stated: "Art is mysterious. In the end, one doesn't know what makes a work touching. It is the result of the artist giving us whatever she knows, with no holding back."

Joan Vennum has exhibited or is in the collection of many important art institutions including: the Columbia University Library, the Brooklyn Museum, the New York Public Library and the Lincoln Center Library Dance Collection in New York; the Albright Knox Gallery, Buffalo, New York; the Maryland Institute, Baltimore, Maryland; the Konstmuseet, Galleri Astley, Uttersberg and the Akademiska Sjukhuset, Uppsal, Sweden; and the Museo Civico, Taverna, Italy. 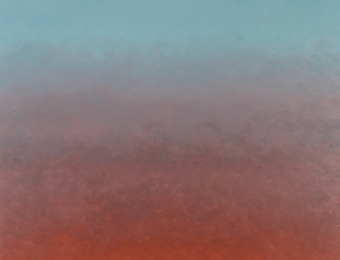